Every summer since I was born, my family spent one weekend in Saugatuck, Michigan, at a private camp on Lake Michigan. 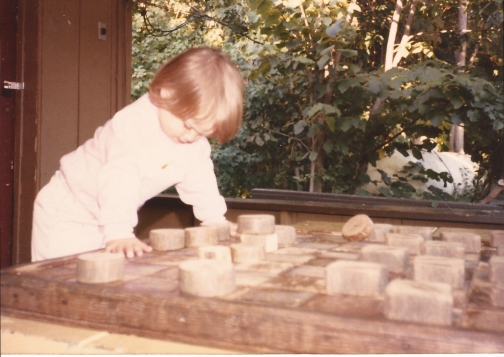 My first year at Saugatuck

Over 100 years old, the camp is made up of a few dozen wooden cabins filled with bowed twin beds. The cabins sit amongst dune grass and trees. Mosquitos and Daddy Long Legs run the place and there isn’t a square inch of the camp that’s free of sand, inside or out. It’s awesome. 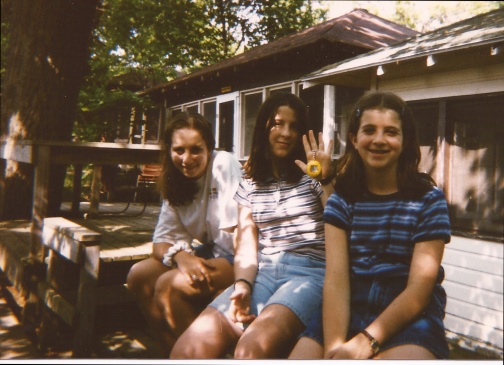 My sister, my friend Elizabeth, my super awesome Tamagotchi, and me in front of our cabin

It’s a church-affiliated camp, technically called Presbyterian Camps. The church I grew up in would go together. But my family always just called it “Saugatuck,” as if the whole town was contained within the boundaries of the camp. 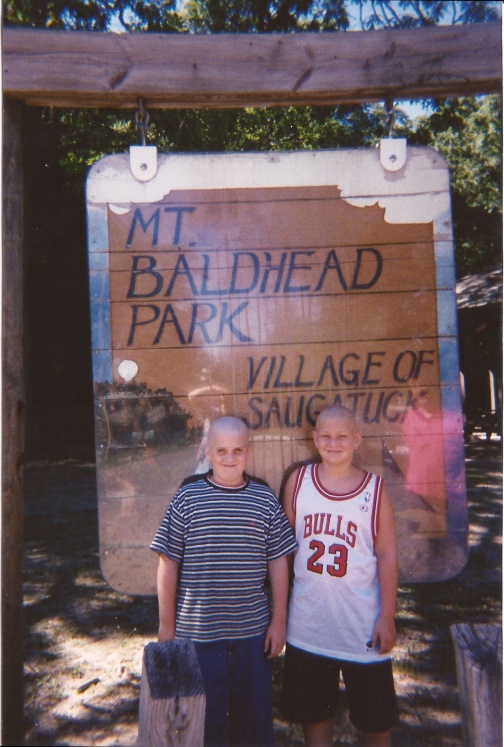 The year my brother and his friend, Ben, shaved their heads

The place holds years of fond memories for me. My brother (now 25) buried his last pacifier there. We would sing songs around a bonfire on the beach, staring at the stars we could never have seen from home in the suburbs of Chicago. We woke up to the sound of waves crashing on the beach only a few yards away. 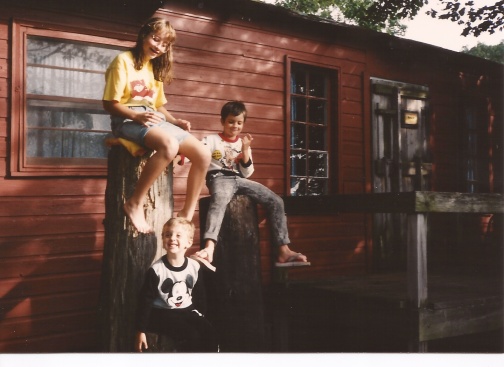 When I left for college, I stopped going to Saugatuck. At first because none of my friends were there any longer, and later because I was too busy, I suppose.

My senior year and second-to-last year at Saugatuck, sitting with my friend Sara

I hadn’t been for ten years when they announced they were closing. The Presbytery needed the money, and the camp was worth a lot. So my older sister emailed the family, asking if we’d like to go one last time. She brought her husband and daughter. I brought Joe, my boyfriend of 4 years, who happens to be from Michigan and has a deep respect for its Great Lake.

The camp hasn’t changed much since I left it—a fresh coat of paint and a refurbished cabin or two. I had expected the camp to seem smaller, and it did. But I hadn’t expected it to seem…less adventurous. As a kid, I was endlessly entertained by the camp. Running down the dune, digging a giant hole in the sand, running back up. At breakfast they had hot chocolate, and I was allowed to drink as much as I wanted. As much as I wanted! Me, a middle child! It was heaven.

That’s me with the short hair (of course)

But as an adult, I suddenly needed more to entertain me. A book, a deck of cards, a beer. Suddenly, grabbing a Sassafrass leaf and smelling it to see if it still smelled like Fruit Loops (it still does) wasn’t quite as awe-inspiring as I once thought it was. 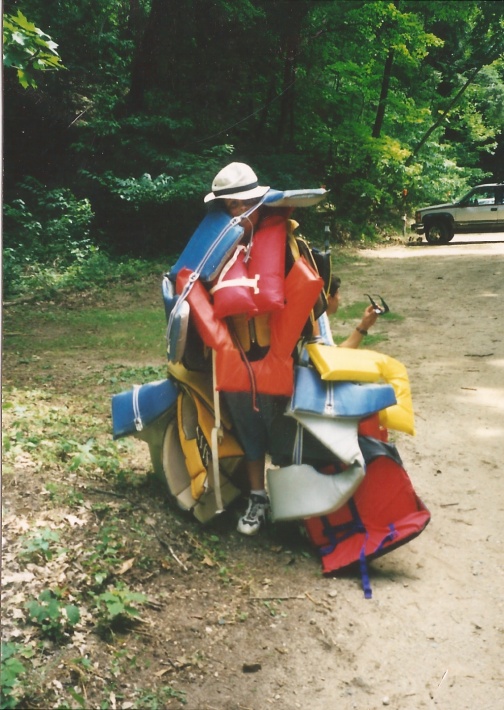 My brother, getting ready to canoe

It’s strange being able to visit a place that holds such strong memories of your childhood. I got to show Joe places that I barely remembered myself, and these memories were still so perfectly preserved: the dining hall still had the same brown tile. The walkways were made of the same wood. The smells were still there, right where I’d left them. It’s the closest to time travel I’ll probably ever get. I can’t show him my first day of high school. I can’t show him my 8th grade bedroom filled with newspaper clippings of Freddie Prinze Jr. I can’t show him what it was like to climb the apple tree in my best friend’s backyard. But I showed him Saugatuck and he knew that it was almost exactly what I experienced every year. This is where I played. This is where my memories are.

My younger brother and sister outside the camp’s crafting area

It’s also strange visiting a place and knowing it’s the last time you’ll ever see it. That doesn’t happen often. Leaving old homes for new ones, maybe. To save myself from the sadness of finality, I always tell myself I’ll be back for some reason or another. I visit a new city and talk about all the things I’ll do next time I go. At least in America (and in Terminator movies), we don’t often say goodbye. We say “See you later!” But the truth is, there are some places you’ll just never see again. Saugatuck is one of those places for me, and I know that without a doubt. And it’s weird.

Me and my older sister, in a hole at Lake Michigan

As we were leaving, I watched two people hugging goodbye. One person was a returning camp counselor; the other was the camp’s cook. It was the longest hug I have ever seen. They didn’t move, they didn’t sway, they didn’t pat each other’s backs. They just stood there. It was the hug of two people who knew they’d never see each other again. Is that sad, or happy? I’m still not sure. We don’t always get to know that this is the last we’ll see someone, but these two got to know it. Would you want to know if it was the last time you were going to see someone? That it was the last time you’d be back?

Would you make the time count any better?

I don’t know if I made the most of my final weekend in Saugatuck. My adult brain, in its need for something more to create an adventure, kept wondering what about me had changed. Maybe it was the years of feeling self-conscious in a swimsuit that kept me from digging a proper sand pit. Or a deadened imagination that required outside entertainment. Or maybe I’m just remembering my childhood in Saugatuck with rose-colored glasses, weeding out all the adventures from the small moments of boredom and quiet.

But however I remember it, that’s where Saugatuck lives now. I won’t be able to bring my children there, as so many generations have done before me. It’s part of my past, along with all the other experiences that only live in my head, never to be seen or walked through again. When the person who bought the camp tears down the cabins and puts fresh new homes in their place, Saugatuck will live only in my memory. I will show my children photos and describe those memories to them:

“Here’s the place where my dad showed me how to fly a kite.” 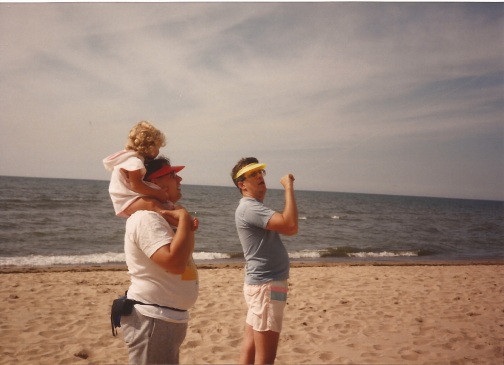 My dad (on the right)

“Here’s the porch swing where my sister and I would sit for hours.” 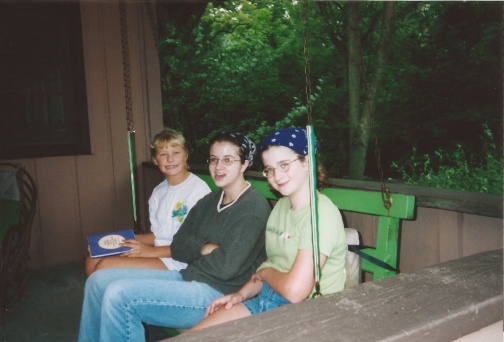 “Here is the village that raised me.”

And my kids will see it, and Saugatuck will still be there, breathing deep gulps of air that smells like sand and sunscreen and oak.

That’s where Saugatuck will live. 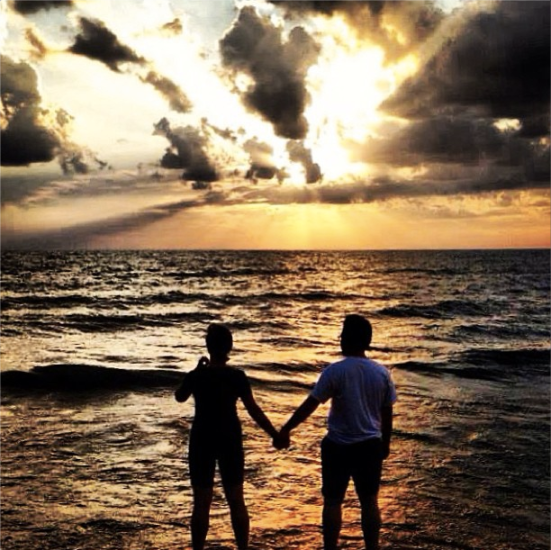